On March 23rd  François Muller spoke at the 2018 Paris DRBF (Dispute Resolution Board Foundation) Conference, on the obstacles and opportunities offered by DBs as a dispute resolution mechanism in the context of large current and future infrastructure projects in France (Grand Paris, Olympic games, offshore wind projects).

The conference showed the particular interest of stakeholders in the use of dispute boards whenever a large-scale project faces schedule constraints. Gathering lawyers, engineers and experts, the DRBF is a perfect forum to address these topics: Altana was keen to mark its regular support by sponsoring the Paris conference, hosted in the FNTP premises. 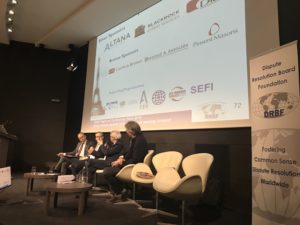 We use cookies on our website to give you the most relevant experience by remembering your preferences and repeat visits. By clicking “Accept”, you consent to the use of ALL the cookies. However you may visit Cookie Settings to provide a controlled consent.
Cookie settingsREJECT ACCEPT
Manage consent

Other uncategorized cookies are those that are being analyzed and have not been classified into a category as yet.

Advertisement cookies are used to provide visitors with relevant ads and marketing campaigns. These cookies track visitors across websites and collect information to provide customized ads.

Performance cookies are used to understand and analyze the key performance indexes of the website which helps in delivering a better user experience for the visitors.

Save & Accept
Powered by